skip to main | skip to sidebar

The Last Tango of Dolores Delgado 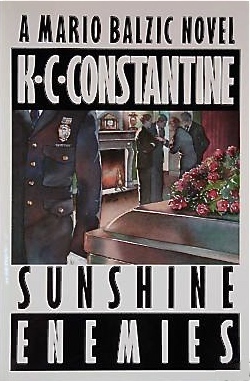 Posted by MrBrian at 2:37 PM No comments:

“She was dangerous – but beautiful!” Title : Shot in the Dark
Author : Merril, Judith, ed.
Cover art : H. E. Bischoff
[N. Y. : Bantam, 1950. No. 751. Cover art depicts a scene from Leigh Brackett’s story, The Halfling. “28 astounding stories that are out of this world.” Anthology of science fiction stories contains: The Sky was Full of Ships by Theodore Sturgeon; The Halfling by Leigh Brackett; Knock by Fredric Brown; Voices in the Dust by Gerald Kersh; A Hitch in Time by James MacCreigh; Gentlemen Be Seated by Robert A. Heinlein; Nightmare Number Three by Stephen Vincent Benet; The Star by H. G. Wells; Mr. Lupescu by Anthony Boucher; The Day of the Deepies by Murray Leinster; The Shadow and the Flash by Jack London; Spokeman for Terra by Hugh Raymond; He Was Asking After You by Margery Allingham; Strange Playfellow by Isaac Asimov; Brooklyn Project by William Tenn; Interview with a Lemming by James Thurber; Mars is Heaven by Ray Bradbury; Who Is Charles Avison by Edison Tesla Marshall; The Facts in the Case of M. Valdemar by Edgar Allan Poe; The Bronze Parrot by R. Austin Freeman; Life on the Moon by Alexander Samalman; Blunder by Philip Wylie; and The Dark Angel by Lewis Padgett (Henry Kuttner and C. L. Moore.)] 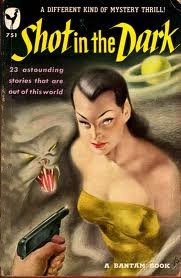 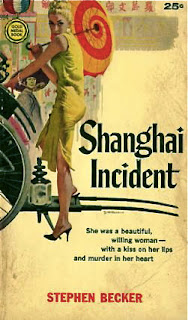 “You need more than luck in Shanghai” – Elsa Bannister (played by Rita Hayworth), The Lady from Shanghai (film, 1948)

Maybe I’m a sucker for all things Shanghai – Paris of the East; hotbead of intrigue, and so on. I’m especially fond of those old movies with the city‘s name in their title – Lady from Shanghai, Shanghai Express, Shanghai Gesture. The (Eurasian?) woman depicted on the front cover of Shanghai Incident is obviously the story’s femme fatale, and I just love the yellow dress, orange umbrella and high heels. By the way, I’m curious to know what those Chinese characters say at the top. And the Chinese woman in the background – is her gaze directed at the woman in yellow or beyond her, out towards the viewer?
I’ve always thought that the Gold Medal line of paperback books in the 1950s were among the best produced and had some of the coolest covers. This stunning design by cover art legend Robert McGinnis typifies the company’s bright, splashy style. I’m most familiar with his work for Dell, especially the series for the Mike Shayne novels, and is it my imagination, or did he change his style a bit for the GM covers? In any case, McGinnis, with Barye Phillips and Robert Maguire, probably did the best portraits of dangerous, seductive women which adorned the covers of so many paperbacks in the vintage era.

Shanghai Incident was first published by Gold Medal Books in 1955 (#456) with serviceable but less atmospheric cover art by Lou Kimmel. The author was listed as ‘Steve Dodge,’ a pseudonym for Stephen Becker. - BCS

Review by Gary Lovisi.
Posted by MrBrian at 3:44 PM No comments: 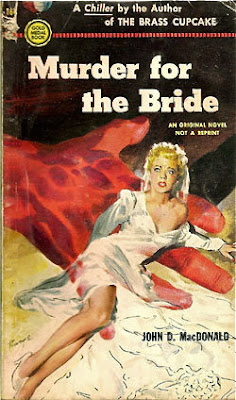 Bride is MacDonald’s second novel and dates from his pre-Travis Magee period. Very much a product of its time, it’s a good example of how the tough school of writers could borrow Red Scare themes and treat them in a hard-boiled style. To wit, Bride is the story of a man who unknowingly marries a communist agent. Many complications follow, one of them being a Spillane-esque denouement in which the hero sniffs out the den of Red spies and has the inevitable confrontation with the bad guys.

In any case Barye Phillips' cover is a stunner. Phillips usually emphasized glamour in his portrayals of women and this one has the glamour but a sharp edge as well, with the ominous gigantic red hand and shadows in the backgound seeming to suggest the Red Menace.

This version is a rare British paperback edition; I don’t recall seeing any other GM books which originated in the UK, and I’m not that familiar with the company’s publishing history to know how this one fits in the mix. Everything seems to be the same as the cover of the U.S. printing except that it happened to originate from the UK. A curious bit of trivia is that my copy didn’t have a GM number. -- BCS 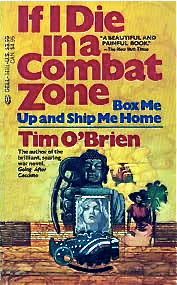